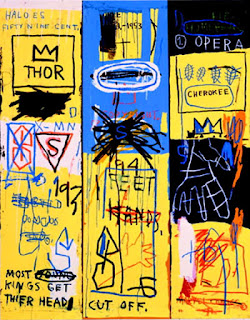 I chose this print by Jean Michel Basquiat called Charles the First, 1982 because I love the text he chose to use as the focus: "Most young kings get their head cut off". I think this text is important and interesting because Basquiat wanted to be famous; he wanted to be king. He saw Andy Warhol as the top of the art scene at the time and he dove right in the mix in order to be at the top as well. I think it is interesting that he chose to say that young kings get their head cut off because he was young at the time. I think it is interesting that he did pass away at a young age after rising to the top and gaining fame, almost like he was king, who at the hand of drugs, met death; much like getting his head cut off.

Posted by Stephanie Schuett at 5:55 PM