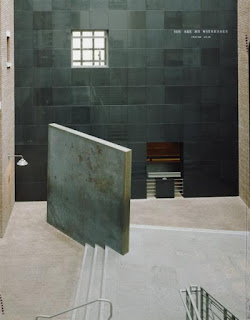 Richard Serra's "Gravity" is located in the United States Holocaust Memorial Museum, as a memoriam to those who lost their life in the genocide. The twelve foot slab of steel weighs thirty tons and cuts through the stairs in which people use, forcing them to diverge from their path. I think this may represent the separation of families during the genocide. However, even though they could not see one another, as the visitors on each side cannot see each other, they always knew that their family and friends were there.
Posted by Philip Moresco at 5:56 PM